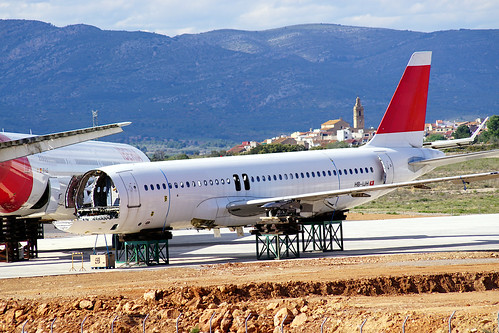 We stopped at Castellón (CDT) for the first time for a quick stop for a few needed frames, not one that gets reported on much.

From the terminal and cargo area, we were able to see and read off everything from the fence lines (some have no reg’s painted). We saw an IBE A340 tail to the far right, so walked up towards the control tower (barrier controlled so could not go up the road with the car). By the roundabout at the top of the hill, you can then see another ramp which looks to be where they are parting stuff out (looked like a new ramp), but also contained the missing ex SilkAir A320 in storage.

No issues with walking around and taking photos. Of note, to the left of the cargo area is a steep drop before a road on the other side (so don’t walk along the fence line this end!). Time was against us, but looking at Google Maps, it is not that easy to get onto that road (bit of a detour and time was against us), but would of given a different view on that cargo area ramp. UR-EMA was behind UR-PSQ, and both E190s were nose on to each other, but from that road it would have been seen better and perhaps some better photos as well of all the aircraft on the deck.

All the Belavia E190s were missing the B, presume because of what is happening in Ukraine so were all “elavia”. One Ukraine 737 was being also worked on, so one perhaps to be activated for this advertised leasing to get some additional cash in.

Last note, there is a new hangar gone up, presume to help with the maintenance / scrapping process. This is to the right of the terminal, but not in use as of yet.